insert enimage *here*
'Life, like a dome of many-colored glass,
stains the white radiance of eternity.'

having posted on The Crystal World previously, let's now visit its (near) contemporary (nearly) *twin*. besides being, eh, ipsis Ballardicus Ballardiores, it is something else besides. that Elseness we'll uncover, then WATCH, from a distance ..

The Eternal Triangle
well, Ballard's, at least / but seen fully distilled - as frozen ideal - in Kavan's novel: Powerman (a thug who's elbowed his way to the top ..), narrator/author stand.in, the Dame (Kavan draws the latter two as .. fools of time locked in a gestural groove ..)

LAST LIGHT RADIO 11:57 PM
He went on to say I had timed my arrival well. 'Our transmitter will soon be in operation, and yours will be put out of action.' I had always told the authorities we needed a more powerful installation; that it was only a question of time before the existing apparatus was jammed by a stronger one. He assumed that I had heard this was about to happen, and had defected accordingly .. 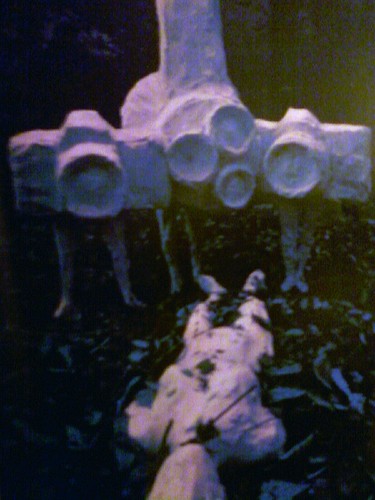 intro by Christopher 'The Prestige' Priest, who qualifies ICE as
"slipstream," citing Magical Realism and "The Brave Little Toaster."
i would add Herbert Read's The Green Child (1935), Alasdair
Gray's Lanark (1969? 1981?) and ..

Robbe-Grillet, The Voyeur (1958)
"As he was struggling with a particularly difficult joint, a little liquid squirted out, spattering against the girl's cheek. She said nothing but wiped it off with the back of her forefinger. She was wearing a gold circlet which might have been a wedding ring .."

/* Eternity is a child moving counters in a game;

/ this the "Spark-o-matic Man" - who has performed with th' Chemical Pops. he is driving a large caliber Camaro. what can be his "game"?

/ he wishes to bribe the boy w/ a fine lady's wristwatch !

[ bronchioles diminish (stranger to these parts) ]